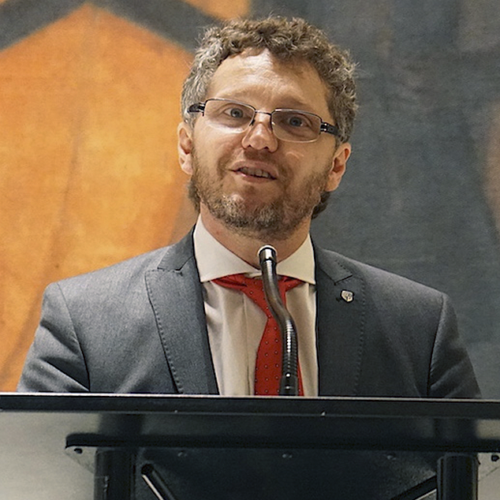 UN Special Rapporteur on the promotion of truth, justice, reparation and guarantees of non-recurrence. Director of the Institute for Human Rights in the Faculty of Law and Social Sciences. National University of La Plata. Former President of the United Nations Human Rights Committee

He regularly teaches post-graduate, master and PhD courses in various academic institutions in the Argentine Republic and abroad, namely in La Sapienza of Rome and Paris II (Sorbonne), where he is visiting professor, thesis director and is a member of the examining committee.

He has published more than one hundred and fifty works in various countries in America, Europe and Asia, most of them in Spanish, and others in French, English, Dutch and Korea.

On various occasions he has worked as Consultant for the Council of Europe, DePaul University, Unicef, Newlink, the United Nations Programme for Development and other entities.

He has been a member and has presided over several ad hoc tribunals on pecuniary reparations in the framework of Amicable Solutions with regard to the Argentine Republic, approved by the Inter-american Human Rights Commission (CIDH).

He represented Amnesty International as president of the Argentinian section and was a member of its international secretariat team in the Conference of Rome which created the International Criminal Court.

He has received various distinctions for his work, among them he was declared “Illustrious Citizen of la Plata”; Distinguished visitor of the Town Council of Oaxaca; Eminent Personality in the Province of Buenos Aires; Illustrious Graduate of the National University of La Plata; Honorary Professor of the University of Buenos Aires, Honorary Professor of the National University of La Pampa, and he was awarded specific recognition by the Honourable Senate of Argentina; the College of Lawyers of the Legal Department of La Plata, and the International Film and Human Rights Festival in Latin America (DERHUMALC).

Prof. Dr. FABIÁN SALVIOLI
This website uses cookies to improve your experience. We'll assume you're ok with this, but you can opt-out if you wish.Accept Read more